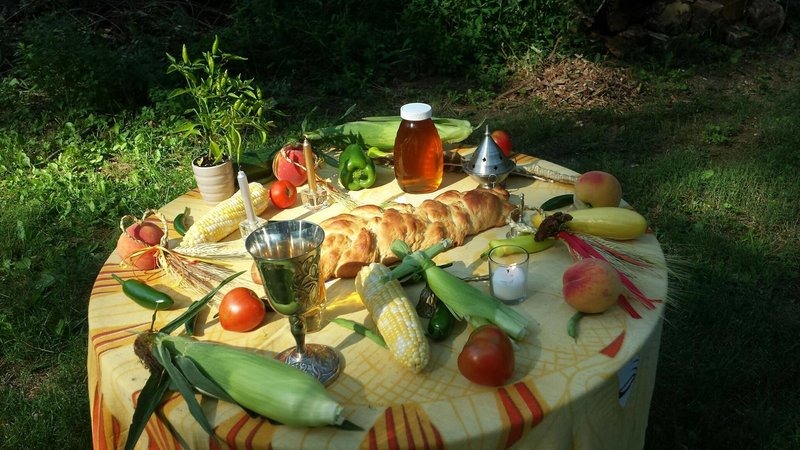 Lammas, also known as Lughnashad, is celebrated on August 1 in the Northern Hemisphere and February 2 in the Southern Hemisphere. Lammas is the Sabbat of the first harvest, at which time the first grains were harvested, breads were made and the bounty was seen in all the land. In my more youthful days in the Boston area, it signaled the happy time of the “Armageddon Games” for our festivals there included a sort of Olympiad where we could compete in anything ranging from best amateur high jump to best poetry.  And while tongue and cheekly Greek in nature, we honored the tradition of Lammas/Lughnasad with rituals and harvest feasts.

And as Paul is a Winter Solstice baby, I am a Lammas baby.  It seemed that every Lammas celebration weekend fell close to my birthday, so while it signaled the close to end of summer, it also brought the promise of a new year, so like any self-respecting Leo, I took this revelry personally. This energy is in a nutshell what Lammas is all about. You sow in Spring. You nourish your growth during summer and you reap your first harvest at Lammas.  At the Autumnal Equinox, you feast on your final Harvest and get your stores of goods ready for the Winter.  Yet, it is as much about the self as it is about the land.

Lammas is a time to ask for further abundance and to expand what you have already reaped into something even better and as there is always polarity in such actions, it is a time to cut the chafe out and get rid of or bury what is not wanted to make room for new growth.

To make an analogy to the land of this cutting away the chafe, think of the Wicker Man and the legend of John Barleycorn and also the novel of Harvest Home. In all three sacrifices are made.  What is not needed is destroyed and the land prospers once again. (If you want to see a ritual devoted to the John Barleycorn legend, come to our Lammas event on Saturday, Aug. 5.)

The origin of Lughnasad is mentioned in some of the earliest Irish literature and has pagan origins. The festival itself is named after the god Lugh. Lughnashad means “Games of Lugh”, since sports and recreational competitions were realized in his honor, as a valiant warrior. It involved great gatherings that included religious ceremonies, ritual athletic contests (which is why we had Armageddon in Boston), feasting, matchmaking and trading. There were also visits to holy wells. Offering of the first fruits, a feast and the sacrifice of a bull and a ritual dance-play in which Lugh seizes the harvest for mankind and defeats the powers of blight.

Lammas is a word for bread dough. It literally was made with the first grains of the season and thus considered sacred because of the promise of more to come. This Harvest needed to last through the winter months.  Think Lord of the Rings.  “Lembas” is a special bread made by the Elves. It is very nutritious, stays fresh for months when kept unbroken in its original leaf-wrappings, and is used for sustenance on long journeys. Hmmm.  And if you want a Lammas bread recipe and  a spell, follow those links.

Ok, one last word on a bit of the headier side.  The OTO has also jumped on our witchy bandwagon following the logic of Aleister Crowley.  Don’t freak, ceremonialists, for I am a respectful member of the OTO but credit needs to be given where credit is due.  “The Sabbats are eight points (our Wheel of the Year) at which we connect the inner and outer cycles: the interstices where the seasonal, the celestial, the communal, the creative and the personal all meet. As we enact each in its time, we transform ourselves. We are not separate from each other, from the broader world around us: we are one with the Gods.”  So, they have created rituals to coincide with our Sabbats.  The Lammas one is the Feast of the Lion-Serpent (very apropos for us Leos) in which there is a bull and a virgin and an empress.

And there is bread. Towards the end, the ritualists partake of the “feast” and say, “Thus I sustain my hunger.”  This ritual is performed during the second decan of Leo, from August 2 to August 12.  Our coven performed this ritual adding only, “El pan es para la vida. No tires el pan!  Ay,ay! Vida mia.” (from the kid’s book Bread Is for Eating by David and Phillis Gershator.